Alexandria Ocasio-Cortez was roundly mocked last week for saying that Millennials are, in fact, the Greatest Generation. And rightly so. By and large, my generation is a waste of its fathers’ seed and a drain on their resources. Culturally, we’re vapid. Socially, we’re maladjusted. Spiritually, we’re lost. Politically, we’re just plain silly.

Had Ms. Ocasio-Cortez been speaking of Millennial Catholics, however, I might be inclined to agree with her.

Of course, most Millennials are “cafeteria Catholics” like our parents. We identify with the Church while rejecting crucial teachings on the Eucharist, sexuality, marriage, and the all-male priesthood. But there are unique signs of renewal among us that should give orthodox Catholics of any age reason to be hopeful. 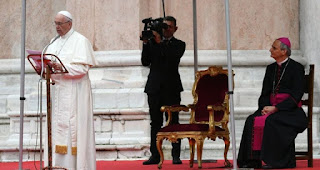 Courageous young priests like Fr. Eddie Dwyer are offering their brave witness to the traditions of Holy Mother Church. Young men and women are flocking to traditional religious orders. From my own conversations with seminarians, I’d estimate that roughly one-third of those ordained in the last year are interested in celebrating the Tridentine Mass.

Political thinkers like Matthew Schmitz and Sohrab Ahmari are bringing Catholic social teaching into the American political debate. Three memoirists have offered moving, penetrating insights into the American experience: the hillbilly transplant J.D. Vance, the Iranian immigrant Ahmari, and the Irish son Michael Brendan Dougherty. All are Catholic, and two are converts.

Progressives in the Church have noticed this trend, too. Massimo Faggioli, a de facto spokesmen for the episcopal establishment, has warned about the rise of “neo-traditionalism” among young Catholics. Austen Ivereigh (another Vatican flak) has dismissed this phenomenon as “convert neurosis”, which is a particularly egregious bit of Bulverism. But at least he doesn’t bother denying that Millennials come to the Church out of concern, not for plastics in the ocean, but for the apostolic Faith.

"Michael's never met a reactionary cause he didn't like."
— Damian Thompson
"Michael sprang fully-formed from the skull of William F. Buckley."
— Dr. William Fahey
Michael Warren Davis grew up in rural New England and worked as a farmhand throughout his youth. After two abortive semesters at The George Washington University, he moved to Sydney at the age of 20.
While in Australia, he was Assistant Editor at Quadrant and wrote a weekly column for The Spectator Australia... all while studying full-time for his Bachelor's degree in English and philosophy at the University of Sydney. (He did rather well.)
In 2015 he moved back to the United States and, after a long and fruitless battle against his Romish instincts, was received into the Church.
In 2016 he began working for the Catholic Herald of London. When the Herald decided to launch its American edition, he was appointed as the inaugural U.S. Editor.
Today, he serves as editor of Crisis magazine.
His work has also appeared in The American Conservative, The Spectator, First Things, and The Salisbury Review, among others. He's appeared on television and radio around the world, including Fox News's Tucker Carlson Tonight and Network 10's The Project.
He's an enthusiastic boxer, a decent fencer, a lousy poet, and a crack shot.
He also loves corresponding/arguing with readers. So, use the form below to send him an email.